We have just launched Version 5 of the ForgeRock Identity Platform with numerous enhancements for DevOps friendliness. I have been meaning to jump into the world of DevOps for some time so the new release afforded a great opportunity to do just that.

As always with this blog I am going to step through a fully worked example. In this case I am using IBM Bluemix however it could just as easily have been AWS, Azure. GKE or any service that supports Kubernetes. By the end of this blog you will have a containerised instance of ForgeRock Access Management and Directory Services running on Bluemix deployed using Kubernetes. First off we will cover the basics.

There are many tutorials out there introducing dev ops that do a great job so I am not going to repeat those here I will point you towards the excellent ForgeRock Platform 5 DevOps guide which also takes you through DevOps deployment step by step into Minikube or GKE:

What I want to do briefly is touch on some of the key ideas that really helped me to understand DevOps. I do not claim to be an expert but I think I am beginning to piece it all together:

12 Factor Applications: Best practices for developing applications, superbly summarised here this is why we need containers and DevOps.

Containers: A minimal operating system and components necessary to host an application. Traditionally we host apps in virtual machines with full blown operating systems whereas containers cut all of that down to just what you need for the application you are going to run.

In docker containers are built from Dockerfiles which are effectively recipes for building containers from different components. e.g. a recipe for a container running Tomcat.

Container Registry: A place where built containers can be uploaded to, managed, downloaded and deployed from. You could have a registry running locally, cloud environments will also typically have registries they will use to retrieve containers at deployment time.

Kubernetes: An engine for orchestrating deployment of containers. Because containers are very minimal, they need to have extra elements provisioning such as volume storage, secrets storage and configuration. In addition when you deploy any application you need load balancing and numerous other considerations. Kubernetes is a language for defining all of these requirements and an engine for implementing them all.

In cloud environments such as AWS, Azure and IBM Bluemix that support Kubernetes this effectively means that Kubernetes will manage the configuration of the cloud infrastructure for you in effect abstracting away all of the usual configuration you have to do specific to these environments.

Storage is a good example, in Kubernetes you can define persistent volume claims, this is effectively a way of asking for storage. Now with Kubernetes you do not need to be concerned with the specifics of how this storage is provisioned. Kubernetes will do that for you regardless of whether you deploy onto AWS, Azure, IBM Bluemix.

This enables automated and simplified deployment of your application to any deployment environment that supports Kubernetes! If you want to move from one environment to another just point your script at that environment! More so Kubernetes gives you a consistent deployment management and monitoring dashboard across all of these environments! 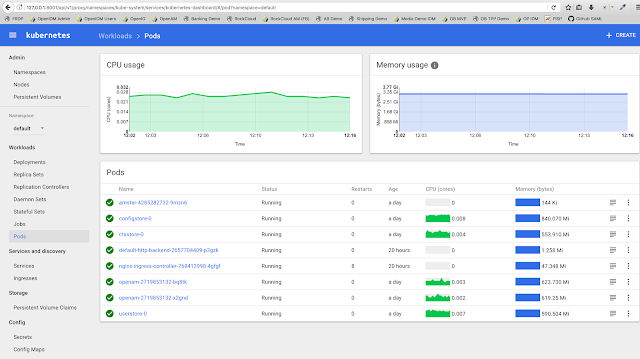 Helm: An engine for scripting Kubernetes deployments and operations. The ForgeRock platform uses this for DevOps deployment. It simply enables scripting of Kubernetes functionality and configuration of things like environment variables that may change between deployments.

The above serves as a very brief introduction to the world of DevOps and helps to set the scene for our deployment.

If you want to following along with this guide please get yourself a paid IBM Bluemix account alternatively if you want to use GKE or Minikube ( for local deployment ) take a look at the superb ForgeRock DevOps Guide. I will likely cover off Azure and AWS deployment in later blogs however everything we talk about here will still be relevant for those and other cloud environments as after all that is the whole point of Kubernetes!

In Part 2 we will get started by installing some prerequisites and building our first docker containers.