At the heart of OpenIDM are managed objects. Out of the box three managed objects are configured:
In this blog we will examine the user managed object in detail, roles and assignments will be explored later in the series.
It is important to understand that objects can really be anything and you can create new objects very easily. This is an incredibly powerful way to model all sorts of different things:
Not only can you model things, but you can also model the relationships between things. For example:

All objects have the following properties:
Lets look at each of this in detail.

Not much to say here. Just the name of your object and you can select a funky icon that will be displayed throughout the interface wherever your object is used.

The properties that actually comprise your object. Lets take a look at the managed user schema. 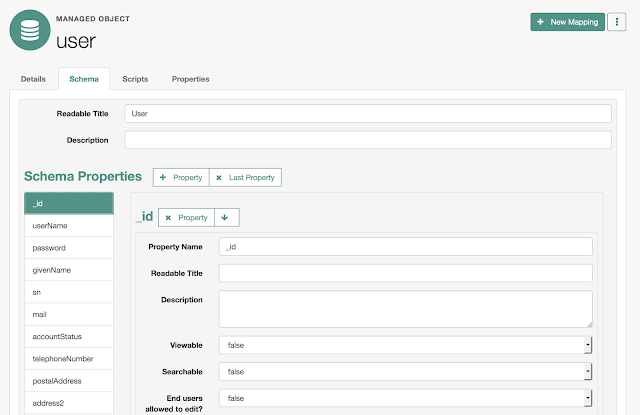 On the left, under Schema Properties you can see each property that comprises a user. There are many properties available out of the box and you can easily add or remove properties as required.
Let’s look at a property in detail. 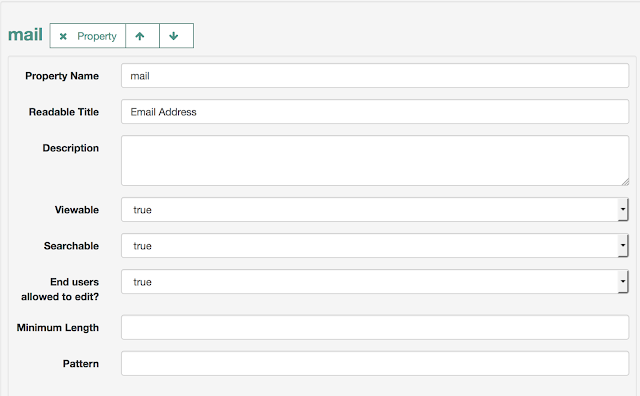 So what does a property comprise of:

Validation policies are ways to validate the attribute. The example below checks that the mail attribute is a valid email address. This prevents the user from inputting an invalid email address during self registration or an administrator changing the email incorrectly. 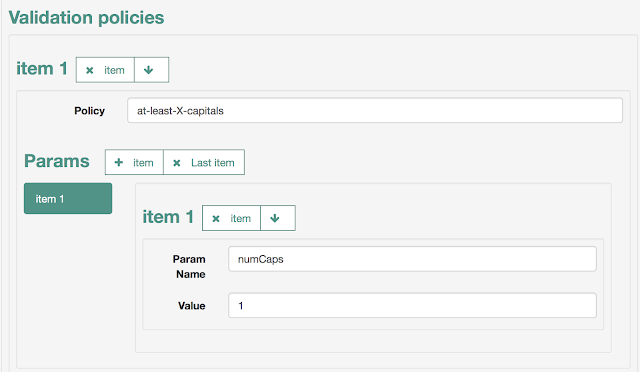 What are we saying here?
Relationships let you model relationships between all sorts of types of objects, users, organisations, devices, products, anything.

Objects also have events which can be used to trigger events.

Out of the box, the above scripts are configured:
onCreate: The script that runs when the object is created. In this case, a script used to set the default fields for a user.
onDelete: The script that runs when the object is deleted. In this case, a script is used to cleanup users after deletion.
These scripts are completely configurable and new scripts can easily be added.
If you try add a new script you will see there are three options:
Note: If you add new scripts, these should be placed somewhere else, usually: /usr/local/env/box/openidm/script
Scripting is a great way to do all sorts of things to help you manage objects.

Properties let you define additional behaviors for attributes.
A common use for this is calculating effective roles. Effective roles are dynamically calculated using an out of the box script:

You can examine the script here: /openidm/bin/defaults/script/roles/effectiveRoles.js.

Managed Objects and the REST API

For the final part of this blog I want to take a look at something I think is pretty cool. The OpenIDM REST API.
All managed objects ( including the ones you can create yourself ) are automatically made available using a REST API.
Using the API you can Create, Return, Update and Delete objects ( CRUD ) as well as search for and query objects. We will dive into the REST API in a later series but we can do a quick demo just to get a feel for how it works.
I recommend downloading Postman for this, Postman is a plug in for Chrome that lets you easiy invoke REST API’s. You can grab it here: https://www.getpostman.com/
Once you have Postman. Log into OpenIDM as administrator and go to Manage, then User and create a new user:

Press Save. Now look at the URL:

Note the long string of letters and numbers. This is the object id for our new user.
Now if we go to Postman, we can setup a new request:

Now, if you press Send, you should retrieve the user we just created:

This is just a small taster of what the REST API can do and we will explore it in much more detail in later blogs. You can also read all about the REST API here:
https://forgerock.org/openidm/doc/bootstrap/integrators-guide/index.html#appendix-rest
Share this
0 likes
Related Articles
4 Comments